BlueRiver and Audio Over IP 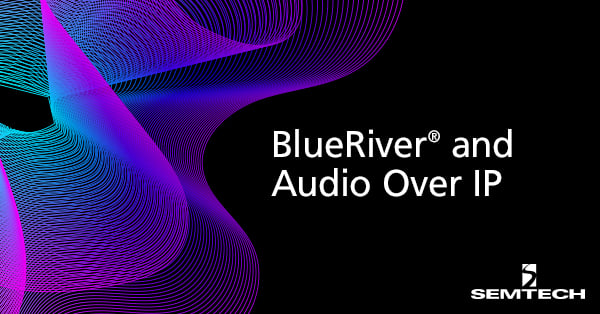 Since starting out my career working at Dolby Laboratories in the early to mid-90s, I’ve often been referred to as “the audio guy.” However, I’ve actually spent the majority of my career working with video technologies, initially with the Serial Digital Interface (SDI), and more recently, with Software Defined Video over Ethernet (SDVoE™) which is powered by Semtech’s award-winning BlueRiver® technology for Pro AV. Still, I have a soft spot for all things audio and make a point of highlighting the audio features of my product lines, as some of these often get overlooked.

The primary interface for delivering AV content with BlueRiver is the High-Definition Multimedia Interface (HDMI). On top of supporting pristine video content up to 4K resolution, HDMI can be used to carry full bandwidth multichannel audio, at a wide range of sampling frequencies and bit depths, from CD quality consumer audio, up to professional quality high sample rate audio for mastering. HDMI also delivers many of the surround audio formats, from Dolby Digital and DTS, through to the latest immersive audio formats such as Dolby Atmos and DTS:X. If it can be carried over HDMI 2.0b, it can be distributed over IP using BlueRiver technology. And since audio is streamed over the network independently of the video, audio can be routed to dedicated AV receivers (AVR) or audio processors, while the video is routed to a display. This audio breakaway feature is essential for large AV systems that need to switch audio independently, or in residential AV, where high-end AVR’s are used to decode surround audio from multiple sources, without switching the HDMI input signal to the AVR. The following diagram illustrates independent HDMI audio and video routing in a residential AV application.

Audio In and Out?

Of course, audio doesn’t always originate from HDMI. Other audio sources such as microphones or analog audio from a laptop may require distribution over the IP network. By providing dedicated serial digital audio inputs directly on the BlueRiver chipset, capable of carrying both stereo and multichannel audio, audio sources from standard analog to digital converters (ADC) or digital signal processors (DSP) are easily converted to IP for routing and distribution over the SDVoE network.

The BlueRiver chipset also provides both stereo and multichannel serial audio outputs for direct connection to digital to analog converters (DAC) and DSPs. Any audio source on the SDVoE network can be routed to a BlueRiver-based endpoint, for connection to playback devices or further processing. Whether the audio originated from HDMI, a stereo analog audio source, or a multichannel PCM stream from the serial digital input of another BlueRiver device, there is no limitation on where this can be routed. All types of audio streams, regardless of origin, can also be embedded in the HDMI output of an SDVoE receiver, as illustrated in the following diagram. 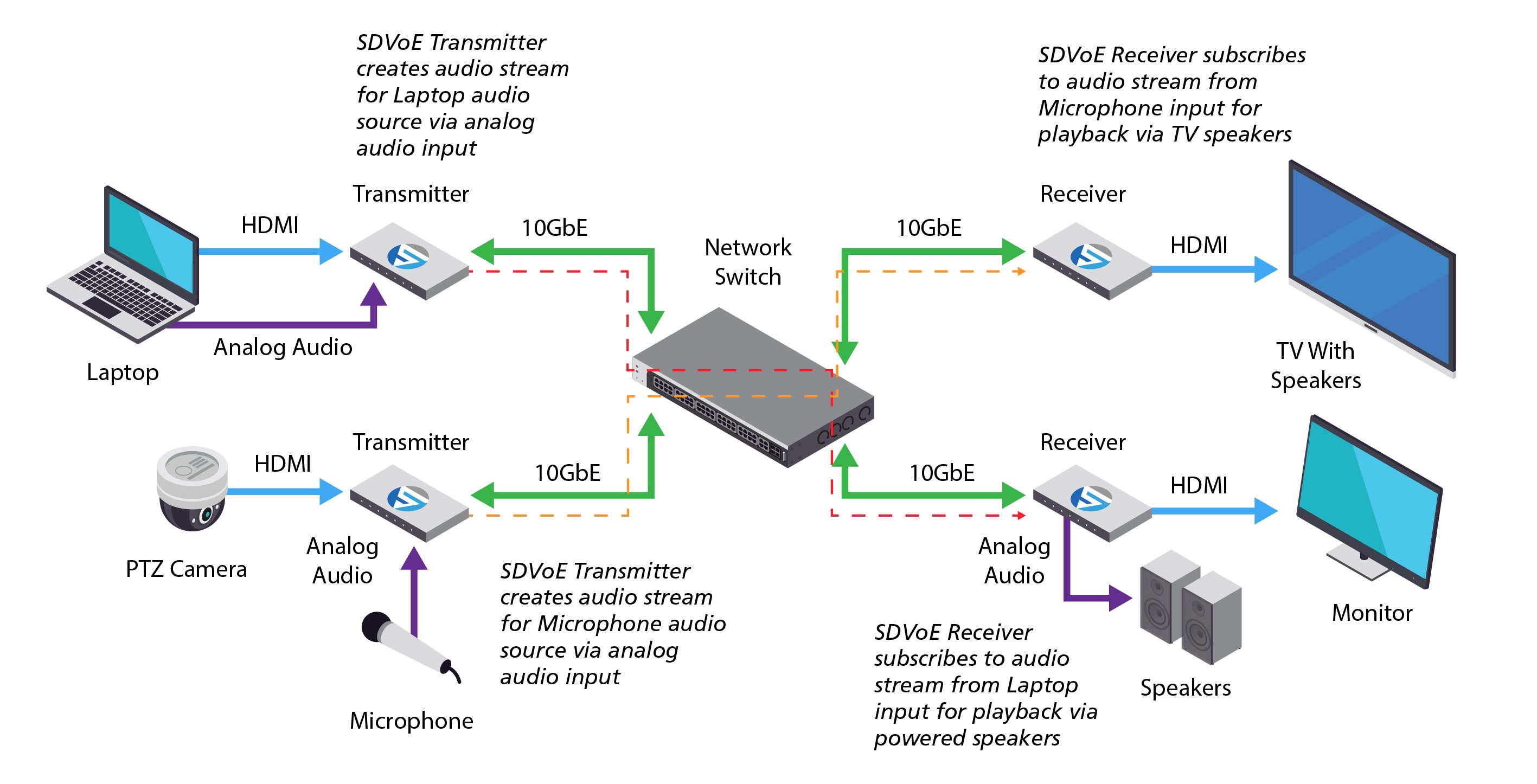 Every BlueRiver device provides simultaneous multichannel audio input and output, permitting subscription to audio IP streams from the network, while sending audio as IP streams back onto the network. So whether the SDVoE endpoint is a transmitter or receiver, it can be receiving and sending multichannel digital audio at the same time. When encoded multichannel or immersive audio formats are distributed over the SDVoE network, it may be desirable to provide endpoints which can decode this audio to discrete (uncompressed) multichannel audio for re-distribution over IP, allowing other endpoints to use this audio without a dedicated surround processor. Taking advantage of both dedicated audio inputs and outputs, a single BlueRiver-enabled endpoint can provide this function, supporting high bit rate (HBR) compressed audio to PCM conversion applications, as illustrated in the following diagram.

Only have stereo audio playback on some endpoints? Not a problem! Every SDVoE endpoint provides downmixing of up to eight channels of linear PCM audio to two-channel stereo. This is ideal for an AV distribution system that is streaming the latest blockbuster movie in glorious Dolby Atmos to a fully equipped home theater, while playing back on TV with built in stereo speakers in the kitchen, where the popcorn is being prepared. The SDVoE receiver connected to the kitchen TV simply provides a downmix of the multichannel audio stream to stereo, embedded into its HDMI output.

HDMI provides for audio connectivity in both directions, embedded with the video data in one direction, and using the Audio Return Channel (ARC) in the other direction, all over a single HDMI cable. This feature allows the audio from a Smart TV that has embedded video applications such as Netflix and Amazon Prime, which provide for high quality surround encoded audio, to be sent back to an AVR using the ARC. So when you’re watching the latest Netflix original release with 5.1 surround audio, you can still experience the surround audio via your audio system without any additional cabling from the TV.

Latest generation consumer products are now providing for enhanced ARC, or eARC, which provides a higher bandwidth audio return channel, capable of carrying the latest HBR audio formats, both compressed and uncompressed. AV over IP systems using SDVoE allow for a more distributed system, where audio receivers and amplifiers are in an equipment closet, remote from the TV itself. This requires that the eARC signal be passed from the SDVoE receiver driving the HDMI input to the TV, through the SDVoE network for subscription by the SDVoE transmitter connected to the AVR. The following diagram illustrates how the eARC signal is passed through the network, taking advantage of the serial digital audio inputs and outputs on the BlueRiver device. 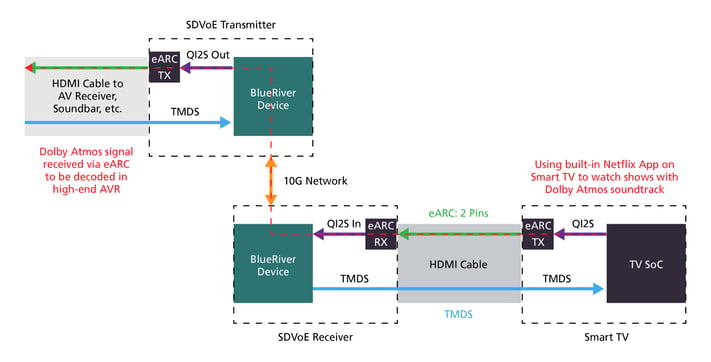 Dedicated Audio over IP protocols, such as Dante from Audinate, provide audio distribution over standard Ethernet networks. AV over IP systems may be designed such that both SDVoE and Dante audio streams coexist on the same network. In order for audio streams to be passed between SDVoE endpoints and Dante-enabled equipment, the BlueRiver chipset can be combined with a Dante audio device, capable of converting serial digital audio to and from Dante audio network packets. SDVoE endpoints can optionally provide a Gigabit Ethernet (1GbE) port to bridge between the 10G Ethernet SDVoE network and a 1GbE network. This 1GbE port is used to pass Dante audio streams to and from the Dante device to the 10GbE network, while serial digital audio interfaces are used to pass audio between the BlueRiver and Dante device, as shown in the following diagram.

Converting between SDVoE and Dante audio streams on a shared network

Where there may already be a separate dedicated Dante audio network, a similar approach can be designed, where the SDVoE endpoint converts to/from SDVoE audio streams and to/from Dante audio streams, with audio passed back and forth between the two domains using the serial digital audio interfaces. This is illustrated in the following diagram.

Audio bridging between an SDVoE network and Dante Audio network

BlueRiver for Audio over IP

BlueRiver gives manufacturers of Pro AV equipment the flexibility to support the audio content they need, across a range of formats and transport technologies. Whether that’s routing of HDMI audio independently from video, downmixing or converting between audio formats, or bridging between network audio technologies such as Dante. You can learn more about the power of BlueRiver solutions for SDVoE in the webinar, “BlueRiver ASIC: Enabling a New Class of SDVoE Products,” and why key Pro AV verticals require the versatility and flexibility of SDVoE audio routing and distribution in the “Spotlight on Key Verticals for BlueRiver” webinar.

Semtech, the Semtech logo and BlueRiver are registered trademarks or service marks of Semtech Corporation or its affiliates. SDVoE is a trademark or service mark of the SDVoE Alliance.