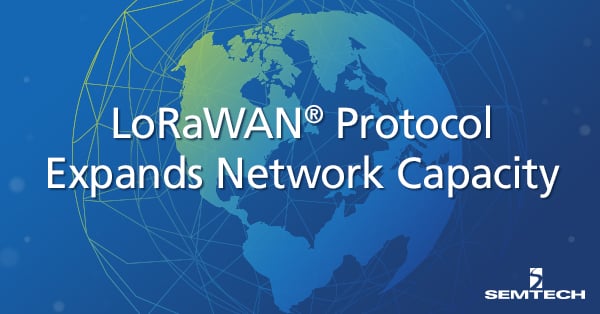 Similar to Wi-Fi over the past two decades where available frequency bands (2.4GHz, 5GHz and very recently 6GHz) and channel bandwidths (20MHz, 40MHz, 80MHz, and 160MHz) have expanded to support exponential growth, the introduction of the new LR-FHSS data rates will continue the rapid expansion of LoRaWAN networks worldwide. Presently, according to the LoRa Alliance, LoRaWAN networks have been deployed in 162 countries by 148 network operators. The use of the open LoRaWAN protocol for the Internet of Things (IoT) applications continues to increase at an amazing pace. Incorporating the new LR-FHSS technology into the LoRaWAN protocol future-proofs network capacity while maintaining its low power consumption capabilities.

LR-FHSS features high interference resistance that alleviate packet collisions by increasing spectral efficiency with the ability for uplink frequency hopping modulation. This is accomplished by breaking up each data packet being sent from an end node into small pieces (each piece is around 50 millisecond long) and randomly spreading them over a defined frequency bandwidth which includes 137kHz, 336kHz and 1.523MHz depending on the region. In addition, LR-FHSS uses redundant physical headers on different frequencies to further improve the modulation robustness to in-band interferers.

LR-FHSS modulation will be supported on Semtech SX1261, SX1262 and LoRa Edge™ (LR1110) transceivers, and LoRa® chip licensees. LR-FHSS demodulation will be supported on Semtech SX1301-based V2.1 gateway that now has increased capacity for millions of LR-FHSS uplinks per day. Semtech expects to make evaluation software and tools available around January 2021 for customers who sign the Technology Adoption Program (TAP) evaluation licenses.

There are still many places in the world without Cellular or Wi-Fi signals. Satellite companies are filling connectivity gaps and addressing global challenges by integrating terrestrial connectivity via LoRaWAN networks with satellite communications to gather data from remote sensors – especially in hard to reach areas. Real time monitoring for wildlife conservation in Africa, smart agriculture solutions to improve crop yield and tracking global distribution assets to improve supply chain efficiency are some of the use cases.

LR-FHSS enables satellite to connect vast remote areas around the globe. It is the key to providing direct data links from end nodes to satellites by leveraging either the Industrial, Scientific and Medical (ISM) unlicensed band or a licensed spectrum. LR-FHSS can support millions of end nodes and delivers a new level of reliability for IoT services – enabling satellite companies to achieve a faster return on its investment.

As adoption of the LoRaWAN protocol continues its rapid growth, the number of end nodes and gateways will expand significantly. More and more demand for LoRaWAN network capacity will arise.

Trackers, smart buildings, smart streets, smart homes, and smart communities are among the many emerging use cases. In addition, longer and more frequent messages are coming from these new use cases (more “chatty” devices). As a result, the amount of LoRa modulation signals in the air is expected to increase significantly.

Adding more gateways to meet the growth of a LoRaWAN network is one solution. The new LR-FHSS modulation provides an additional boost to expand network capacity and increase robustness. As described earlier, LR-FHSS achieves this by utilizing its expanded frequency bandwidth, carrying out frequency hopping and using redundant physical headers on different frequencies.

Smart metering is one of the most adopted and growing market applications for applications leveraging the LoRaWAN protocol due to its unique long range, low power capabilities that offer several advantages for battery-powered meters. IHS Markit forecasts that smart meters and utility applications connected via LPWAN technologies will total more than 300 million by 2023.

LR-FHSS and its frequency hopping ability resolves any data packet dwell time limitations required by regulators in some countries, for example, in the U.S. where the FCC has applied a 400 millisecond limitation to allowed dwell time.

As a result of this limitation, previously the minimum allowable data rate available for the LoRaWAN protocol in the U.S. was SF10, and only 11 bytes of payload can be used at that data rate. The new LR-FHSS data rates will support the equivalent of the current SF10, SF11 and SF12 data rates. Devices can go down to either 325b/s with a payload of 125 bytes, or 162b/s with a payload of 50 bytes.

Every company that owns at least 150KHz of licensed spectrum can now build a high QoS LoRaWAN network with plenty of capacity, and generate good return on investment.

Read the announcement on LR-FHSS to learn more.

Semtech, the Semtech logo and LoRa are registered trademarks or service marks of Semtech Corporation or its affiliates