HotSwitch® – The eFuse For Your Next Design 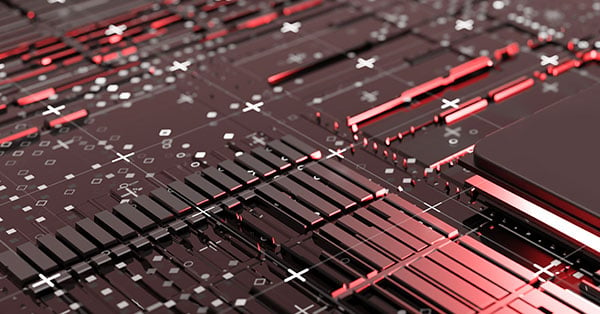 HotSwitch® is a new product line of devices from Semtech with an integrated load switch or eFuse that protects electronics systems against typical electrical transients and steady-state fault conditions. Primarily, the HotSwitch device turns on or off the current flow to a power rail as-needed. It detects electrical surges and secures the downstream subsystem by disconnecting the load from the power source. At the same time, the devices in Semtech’s HotSwitch portfolio provide an enhanced shield against inrush current, overvoltage, under voltage, reverse current, short circuit, and over-temperature faults. Figure 1 shows how a system is protected by a HotSwitch device.

Modern-day power electronic devices are designed to be smaller, more innovative and more efficient. Being power efficient means consuming power only when needed by the system. For a portable battery-powered device, saving power means longer battery life. But in recent years, power saving has become crucial for any electronic device, whether it is battery-powered or not. For an electronic gadget, not all circuitry needs to be active all the time. These circuits can consume power even in sleep mode. A load switch can automatically turn off and turn on a load as needed, significantly reducing overall power consumption. Multiple power sources are used in some applications, such as microprocessors, FPGAs, network switches, or industrial controllers. To ensure turn on and turn off happens appropriately, a specific order needs to follow in distributing power in the circuit. This ordering called power sequencing is done by load switches. Turning the load on and off and power sequencing are not the only functions carried out by a load switch. It also protects the load from a power supply in abnormal power situations such as inrush current and electrical transients.

Along with inrush current control, a load switch protects the electrical circuit from overvoltage, undervoltage, over-temperature, short-to-the-battery, and short-to-ground conditions. Due to all these protection features, the load switch is also called an electronic fuse or eFuse. An eFuse can replace a fragile conventional fuse and integrate all the protection features into one product. Semtech recently released an eFuse product, HotSwitch HS2950P. It is a single-channel integrated eFuse with a wide input voltage range of 2.7V to 29V, supporting up to 5A output current and a low 25mΩ (typical) Rds(on). Bundled in a tiny 3x3mm 12-pin DFN package, HotSwitch HS2950P also includes various adjustable protection features, including soft-start, turn-on-delay, overvoltage, undervoltage, and overcurrent limit.

HotSwitch incorporates several advanced features desirable by a circuit designer. The main element in a HotSwitch device is an N-channel MOSFET which is used as a switch. The MOSFET is a voltage-controlled device. The MOSFET can be turned on or off by controlling the gate to source voltage. In specific scenarios, the MOSFET may need to operate at a voltage near the lower limit of the operating voltage range. A charge pump circuit is used to boost the gate voltage to the proper level to drive the N-channel MOSFET. The MOSFET connects the input line to the output interface. Let's review the basic features of a HotSwitch device shown in Figure 3. 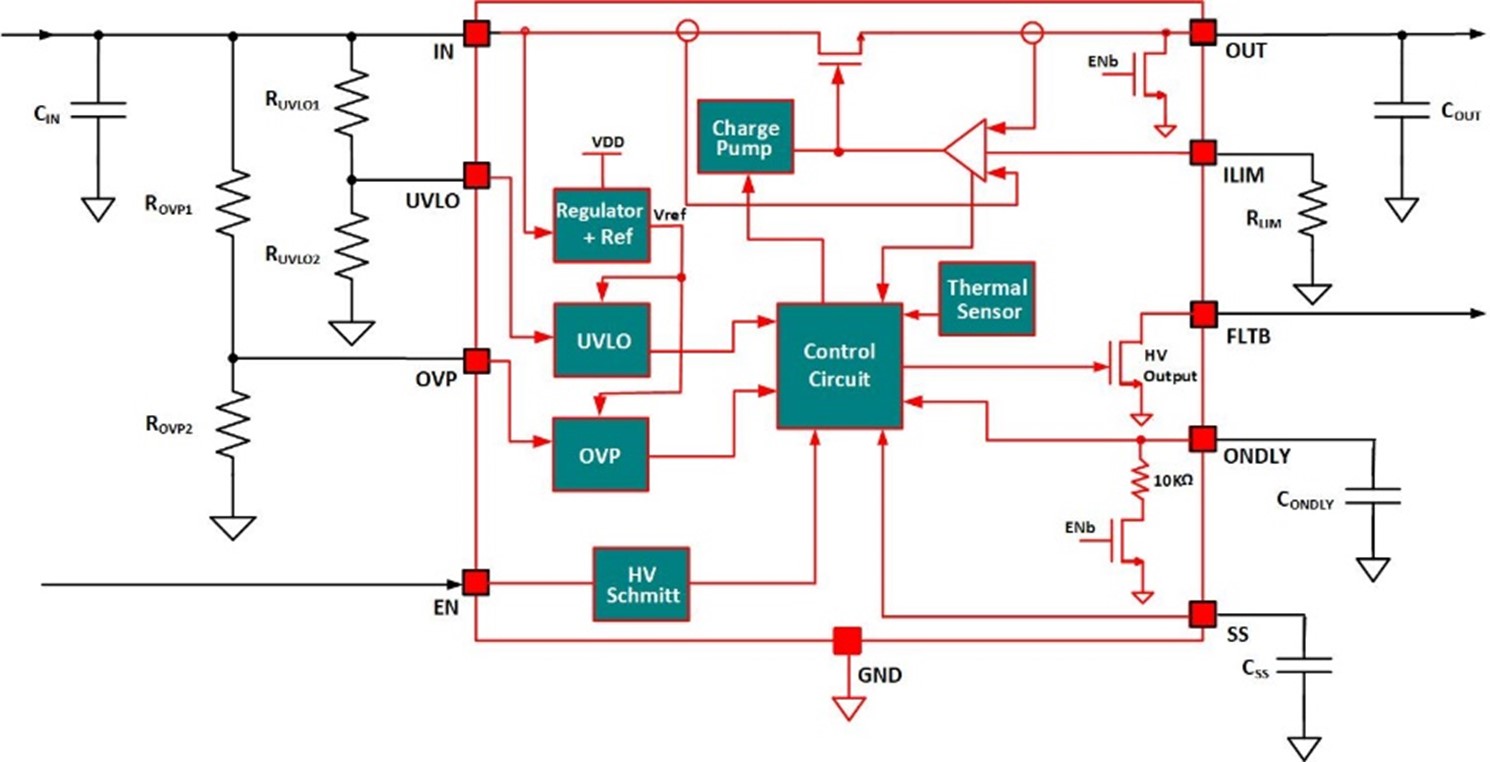 Overcurrent protection (OCP) is a feature to limit the load current in an unusual situation when the load changes abruptly. This feature reduces the risk of potential damage to the circuit. When an overcurrent condition occurs, the HS2950P limits the load current to the threshold set by an external resistor, RILIM. RILIM is connected to the GND pin from the ILIM pin. The HotSwitch device operates as a current regulator during OCP to maintain the current flow at the allowable range. The OCP threshold of HS2950P ranges from 0.5A to 6.5A, set by RILIM. Figure 4 Shows the overcurrent response of HS2950P. During an OCP event, the FLTB signals a fault condition. Once the part enters into OCP event with IOCP=7A, it goes into a 200ms hiccup mode after a 0.5ms blanking time. When FLTB goes high, the part goes back to normal operation. 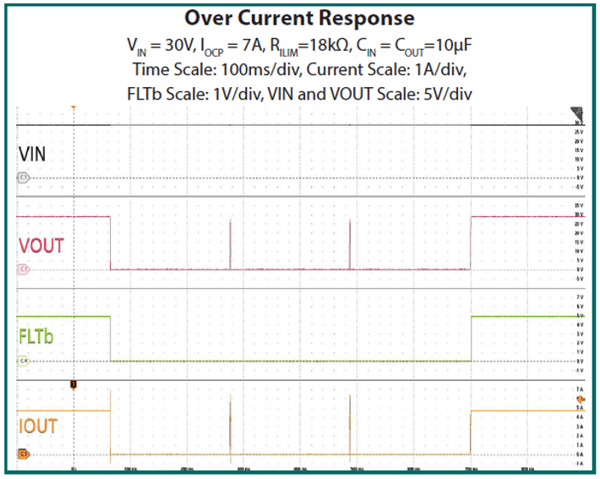 A HotSwitch device guards the electrical circuit against overvoltage and undervoltage by turning off the MOSFET. It features adjustable overvoltage protection (OVP) and undervoltage lock-out (UVLO) thresholds using an external programming resistor network. If the input voltage exceeds the overvoltage threshold, the HS2950P turns off the switch and prevents start-up.

The HotSwitch device also turns off the internal MOSFET and disconnects the load from the supply if the input voltage drops below the UVLO threshold. The undervoltage condition can malfunction the internal circuitry by partially turning the MOSFET on/off or sending incorrect signals to the control circuit. If the OVP or UVLO pin of HS2950P is connected to the ground, a default position for OVP (3.8V typical) and UVLO (2.6V typical) is set internally. Figure 5 shows that when the voltage on the OVP pin exceeds the 600mV threshold, the HotSwitch device turns off the MOSFET and the output voltage goes down to zero. The switch remains off as long as the voltage on OVP pin exceeds the 600mV threshold. 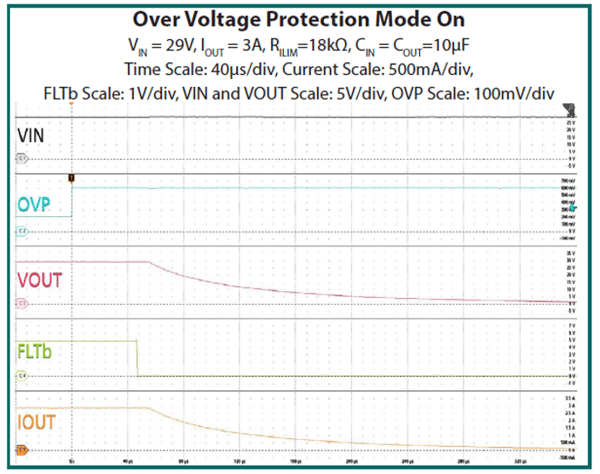 Short circuit protection safeguards the circuit when the output terminal (Vout) is shorted to the ground, and a vast current flows rapidly through the switch. Whenever HS2950P determines a short-circuit condition, it turns off the internal switch. The device automatically attempts to restart immediately after the turn-off. If the short circuit persists, the device regulates the output load current to the current limit level and enters into a 200ms hiccup mode (Figure 6). If there is no abnormality, the HS2950P starts to operate normally.

When a HotSwitch device turns off after a fault condition, the outside voltage does not go to zero immediately. Depending on the load and the output capacitance, it may take some time for the output voltage to go down to zero gradually. But modern electronics demand a complete turn-on and turn-off instantaneously. HS2950P has a feature called automatic output discharge for immediate turn-off. When the switch turns off, a discharge circuit sends all the stored charge to the ground. 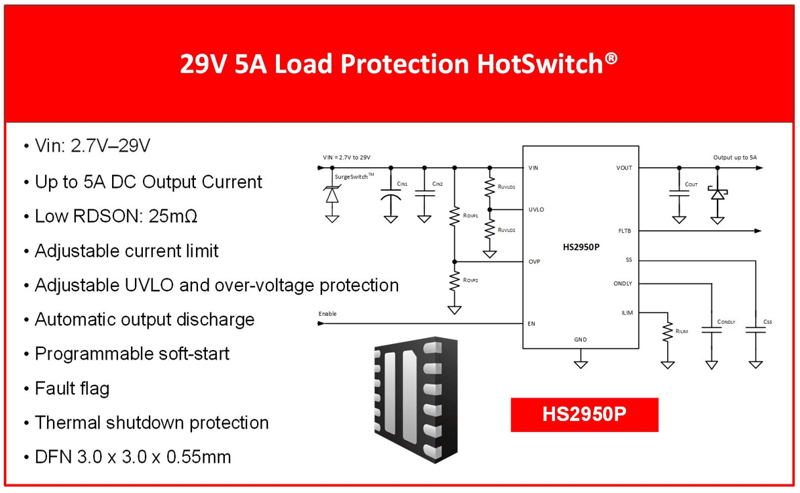 Figure 7. Features and schematic of HS2950P

As electronic waste, or e-waste, is the fastest growing source of waste globally, as the potential amount of e-waste serves as an ongoing challenge for technology manufacturers. Semtech's HotSwitch products can fulfill protection needs, safeguarding electric systems and provides protection features that are able to prolong the life span of electronic devices as well as potentially reduce e-waste. Additionally, HotSwitch is able to meet multiple requirements, including inrush current, overvoltage, undervoltage, thermal protection requirements, quick output discharge, and short-circuit protection. The newly released HotSwitch product HS2950 (Figure 7) integrates all these protection features into one single small footprint 3x3mm 12-pin DFN package. Whether you need an automatic on-off switch, a power sequencing switch or an eFuse for protecting the circuit against transient and steady-state fault conditions, HotSwitch is the answer. Semtech's HotSwitch products offer thermal shutdown functionality and faults flagging to ensure a rugged defense for downstream industrial, telecom and consumer systems subject to transients and short circuits risk.

Semtech, the Semtech logo and HotSwitch are registered trademarks or service marks of Semtech Corporation or its affiliates.