Best of LoRa Technology: 2018 in Review 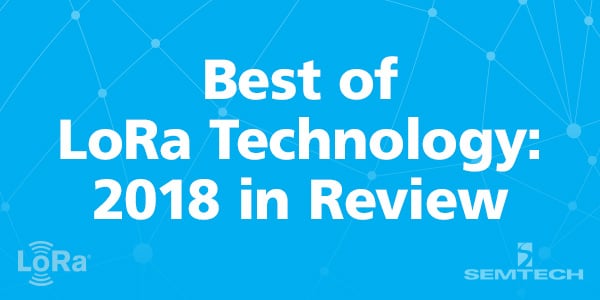 It’s been an impressive year as Semtech’s LoRa® devices and wireless radio frequency technology (LoRa Technology) made significant strides toward becoming the de facto platform for the Internet of Things (IoT) solutions. According to the LoRa Alliance®, by the end of 2018, LoRa and the LoRaWAN® protocol will be deployed in over 100 countries. In addition, tens of millions of end nodes were deployed, bringing an endless number of use cases in key vertical markets including smart buildings, smart metering, smart agriculture, and smart cities. This past year represented a historic period for LoRa Technology, with several highlights that we believe are worth revisiting.

Released in January, the new SX126x family of LoRa products addresses the need for cost-effective and reliable sensor-to-Cloud connectivity in any radio frequency (RF) environment.

LoRa-based IoT Sensors Connect to the Cloud from Space

In February, Semtech announced that Lacuna Space created a LoRaWAN-based network for a series of European Space Agency (ESA) satellites. The application uses a group of orbiting satellites to receive messages from LoRa-enabled sensors on the ground. Lacuna CEO, Rob Spurrett, further explained how it all works, and discussed his experiences at February’s The Things Conference in a guest blog.

In May, the LoRa Alliance reported that Google Cloud had joined as a sponsor member, marking a clear endorsement from Google of the LoRaWAN protocol, and the LoRa Alliance’s commitment to interoperability for the future of IoT. Watch my presentation from the event: Deploying Large Scale, Long Range, Low Power Networks with LoRa & Google Cloud IoT.

At Mobile World Congress Americas in September, Semtech shared its collaboration with Apana on a LoRa-based water leakage detection solution. Apana’s biggest customer is Costco Wholesale. Costco found that with the Apana’s water management solution, each warehouse could reduce its water use 20% and water bills 22% in the process.

Alibaba Cloud Commits to LoRa and Takes to the Skies

In October, Semtech participated in the Alibaba Cloud Computing Conference in Hangzhou, China. At the conference, LoRa Alliance member Alibaba Cloud announced its impressive plan for the IoT, committing to the promotion and popularization to LoRaWAN-based networks and LoRa Technology. 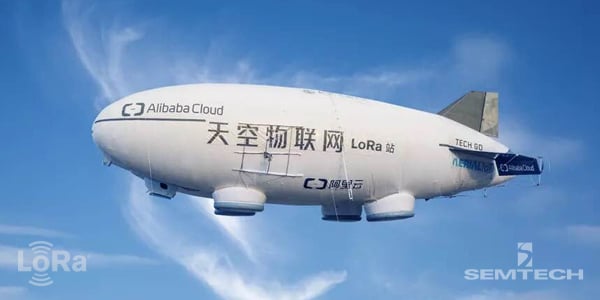 In late October, at the LoRa Alliance All Members Meeting in Tokyo, Semtech previewed the further development of LoRa Technology for better asset tracking and geolocation services. Specifically, Semtech is broadening access to network-generated location data and providing Cloud services to support the rapid development of location-based solutions for LoRa Technology.

In November, Semtech shared that the City of Calgary in Alberta, Canada, had deployed a citywide LoRaWAN-based network. The network was developed in tandem between the City and University of Calgary and would make use of TEKTELIC Communications’ infrastructure. So far, Calgary has made use of its network in a number of innovative ways.

The new SX126x LoRa Technology ICs introduced in January were named the Analog Semiconductor of the Year at the Elektra Awards on December 5. The Elektra Awards are an annual celebration of the electronics industry’s best new products, technological innovations and company performance.

LoRa is the DNA of IoT, enabling devices, networks and applications, and a proven champion for the IoT, creating solutions that are scalable and easy to deploy. We look forward to adding to these LoRa Technology milestones in 2019 and beyond.

From all of us at Semtech, we wish you a happy and healthy new year!

Semtech, the Semtech logo, LoRa, LoRaWAN, and nanoSmart are registered trademarks or service marks, and Neo-Iso is a trademark or service mark, of Semtech Corporation or its affiliates.